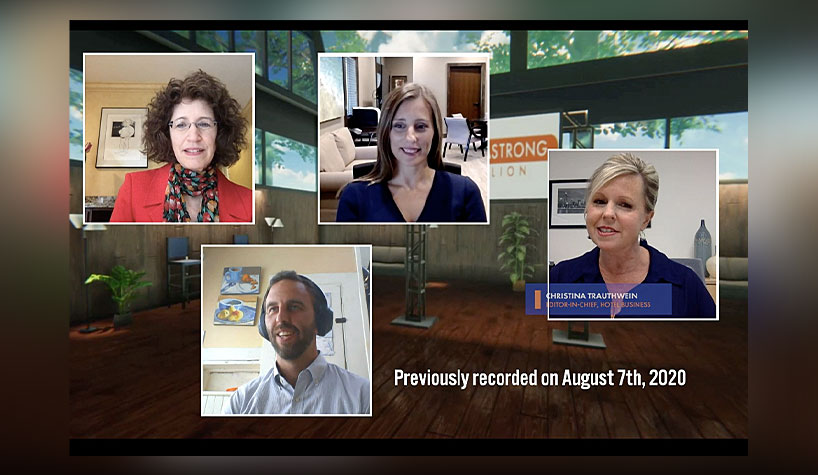 NATIONAL REPORT—During the virtual AAHOACON20 session “What the Data Says: Before, During, and After the Pandemic,” executives from STR, CBRE and Kalibri Labs discussed the current state of the industry by the numbers, as well as predicted what’s to come in the short- and long-term future.

Trauthwein began the discussion touting the improvement in the July jobs report, where the unemployment rate fell to 10.2% and roughly 1.8 million jobs were added in the U.S., and asking the panelists what it meant to the hotel industry.

“There was some good and bad news in that jobs report. The good news to start is the biggest gains were again in the leisure and hospitality industry, which is now down just 25% compared to the levels we were at in February, which compares to 50% in April,” said Lane. “The bad news is that the pace of growth has slowed. While it’s great that the jobs are returning to our industry, as well as restaurants and retail, we haven’t yet seen a strong rebound in the core office-using jobs, like professional business services and financial activities, which are the businesses of many of the customers that we serve.”

Hite let the numbers speak for themselves. “We hit the bottom the week of April 11, when we saw only seven million room nights sold in the U.S.,” she said. “For the week ending Aug. 1, we were at 17 million room nights sold in the week. So, certainly, there is improvement week-over-week, but after the big gains that we were seeing in the second half of April and the month of May, the pace has just started to slow down.”

Green also saw occupancy improve, especially during recent holiday periods. “We had a spurt with the Fourth of July and Memorial Day weekend. There were a few activities that inspired a little bit more activity,” she said. “Our data shows that on the week of April 10, we were down in occupancy 77%. We’re still down, but it’s 48%. That’s pretty good growth. Rates were down 43% at the absolute bottom. They’re still down, but it’s 28%, and we’re seeing decent growth in some areas. So, it’s coming back.”

She added, “It’s not going to be linear necessarily. There’s probably going to be fits and starts, but there’s going to be some intermittent areas that are stalling. The COVID-19 cases are in the areas where the occupancy started coming back a little better—the beach areas and vacation areas—but then people were going there and there were more cases. I just think that it’s going to take time to come out of this period.”

Another deciding factor, according to Lane, is the willingness of the at-home worker to travel. “With us all working from home and more space needed per worker, there’s going to be [fewer] people overall going into the office. Some surveys have shown up to a fifth of workers working from home permanently,” he said.“What does that mean in the long term for lodging demand? It could mean a major shift down or a major shift up. If we’re working from home, we need more reasons to get together. We need more groups and conventions. We need to go visit the home office, see our coworkers and stay in hotels. Right now, I’m leaning more toward the latter, that it’s going to induce more demand, but that’s a big point of uncertainty out there.”

Markets and Chain Scales
The discussion then turned to the performance of different markets and chain scales. Green brought up a change in the mindset of leisure travelers that is a positive for hotel owners.

“Besides everybody knowing that leisure business is growing, a really big difference in this recovery compared to 9/11 or 2009 is that leisure business used to go heavily to the OTAs,” she said. “We’re seeing that it’s now split between brand loyalty member programs and the OTAs, which is a big change. So, from an owner’s point of view, the thing that’s really good news is if that business now, which is about 40% of the demand, is split half and half, half of that business is more than twice as profitable as the third-party business.

“The other thing we’re seeing is within the corporate sector. Even though everybody says business isn’t coming back, we are seeing signs of life in corporate,” she continued. “It is not going to be the Fortune 500 companies going to major markets, but a lot of the local corporate and the smaller corporate accounts. We’ve started to see a little bit of it, but it’s more the SMERF business.”

Hite pointed out the chain scales that were doing better than others. “The upper-midscale, economy and midscale segments are filling over half of their rooms. So, they’re running above 50% occupancy in those segments,” she said. “The upper-upscale chain scale segment is still two-thirds empty, and it will be into the fall before we see if that changes. So, we’re talking about markets that usually aren’t at the top of the list, but in some markets, hotel owners are doing better this year than they were doing this time last year. It’s a very different story depending on what market you’re sitting in, but if you’re in that limited-service segment, in certain markets right now, you’re having a better year than you did last year.”

She added, “Overall, the states with the highest occupancy are Wyoming, Idaho, South Dakota and Montana. Those are states we would never be talking about, but the best-performing occupancy market for the week that ended Aug. 1 was McAllen-Brownsville, TX. You’re looking at smaller destination markets where people are going to the beach.You’ve got Colorado Springs, CO, as the second-highest occupancy market. People are going to destinations, and there is some pent-up demand. Those markets are doing really well with very high occupancy.”

A ramp-up in flights will tell a big story in major markets, noted Lane. “We’re still looking for airline deployments to tick back up as a lot of markets rely on the air traffic to come in. It’s still down 72%, which is very low, though it has picked up a bit in the past couple of weeks,” he said. “Corporate travelers, traveling through the air and booking through GDS [global distribution systems], are down 75-80%, and as we go into the fall travel season, if those don’t start to pick back up, we’re probably going to see lower occupancies going forward or at least dip back down as the demand mix changes.”

Green revealed that corporate business in the lowest part of the downturn was down 73% in terms of occupancy share; as of July 31, it was down 52%. “A lot of that is smaller corporate activity. We know that the big corporate accounts are not letting their teams travel,” she said. “We know that’s going to be off until municipal, county and state restrictions enable groups of bigger than 50. As far as filling in other business, there’s going to be a lot more competition between the upper-upscale hotels and the down-market hotels because they’re going after a lot of the same travelers. The pie just got shrunk for a little while. It’s not that they can just replace it with something else. It’s the pie got smaller and, until that other business fills in, the pie isn’t going to grow back to where it was.”

Green then discussed an advantage loyalty programs have over OTAs as a result of the pandemic. “The loyalty programs are not just point driven. They have benefits like mobile apps and the mobile apps have things like mobile check-in, keyless entry and choose your own room,” she said. “When travelers want to use those contact-less apps in order to improve their experience and feel safer, they’re more likely to book direct. It’s going to impose some strain on what the OTAs had had in past recoveries as a dominant position.”

As far as the transaction market, Lane said that transaction volumes were down 91% in Q2 and total volume was just $600 million. “But it does look like it’s turning,” he added. “I sit in on daily calls with our brokerage teams and they are as busy as they’ve been in a long time. Our debt team is tracking about 80 lenders that are willing to lend on hotel product, which is very good compared to past recessions. And we’re seeing a large amount of bids from all lender types on making deals happen. In terms of value impairment, our evaluation team, business has picked up substantially, and they’re doing something where they’re tracking properties, and how they’re valued today compared to how they valued pre-COVID. On average, values are down about 20-25%; it’s closer to 30% for full-service and as little as 15-20% for select- and limited-service hotels.”

Trauthwein hoped to end the session on a positive note, so she asked the panelists for some signs of encouragement.

“As I said before, there are hotels in some markets that are doing better right now than they were last year,” said Hite. “We see some hotels in the luxury segment that are running a much higher ADR today than they were last year because they have a different mix of business today than they did last year. Yes, their occupancies are down, but their ADRs are actually up and significantly up from last year. We anticipate that demand is going to recover faster than ADR, but by 2023, we’ll be back to our 2019 levels of demand. It may take us a little longer on the rate side, but demand will come back.”

Green noted that she has seen some very positive signs in the fact that a lot of the recovery is coming directly and not from third parties, while Lane pointed to gross operating profit (GOP) margins that today are better than what was seen in past times of really low occupancy.

“Hotel owners and operators have really rolled up their sleeves. They’ve been very proficient at controlling costs. The brands have been working with them, being lenient in terms of service and amenity requirements, and we’ve learned that fixed costs aren’t really all that fixed,” he said. “It does provide some green shoots going forward that the industry is going to get through this. Demand is going to come back and we’re going to return to profitability.”