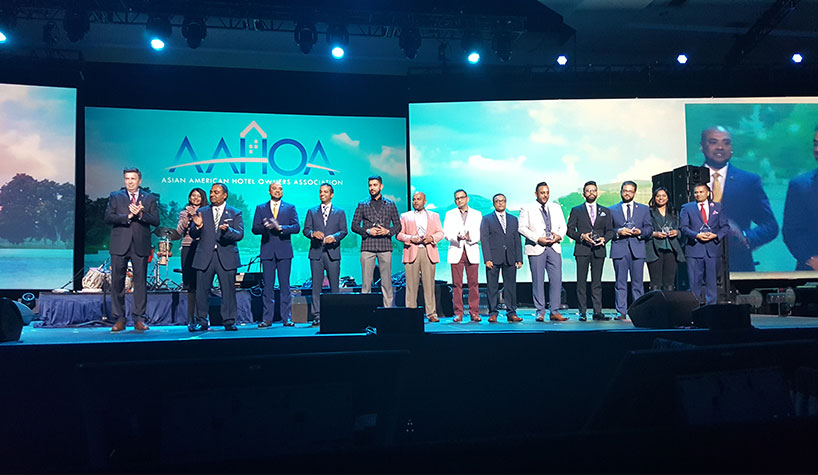 AAHOA Recognized several of its members at its 2018 convention.

NATIONAL HARBOR, MD—In addition to offering the latest information and products for attendees, the Asian American Hotel Owners Association (AAHOA) honored a number of its members at the 2018 edition of its convention.

At the end of August 2017, the Texas Gulf Coast was devastated by one of the worst storms to ever hit the area. While many of the victims of these events had to evacuate their homes due to subsequent flooding and were waiting for humanitarian aid, Tolani immediately jumped into action to help house the displaced and offer comfort to those who needed it.

He set up donation bins for personal toiletries and hygienic items in his hotels in Dallas, Austin and Louisiana. Tolani also opened his properties in Nacogdoches—and other cities in Texas within driving distance from Houston—to displaced victims following the storm with complimentary rooms and hot food.

“During times like this, when there’s a natural disaster, we can’t become paralyzed by fear or uncertainty,” he said. “We have to act fast, rally and start making calls that inspire everyone to do their best. Those immediate calls to action make all the difference.”

Tolani was recognized at the conference by Jagruti Panwala, AAHOA vice chairwoman. “One inspiring example is Sunny Tolani. Sunny lives in California and owns properties in Texas and Louisiana. Even before the storms hit, Sunny immediately lowered, not raised, his room prices,” she said. “He also contacted AAHOA and Texas Hotel & Lodging Association, offering to donate rooms to anyone who had lost their home. Then he told his general managers to give away free meals to anyone in the community who needed food. Sunny did all this, not because a law forced him to do it, but because he understands what it means to give back.”

Houston’s Hotel Bella was recognized as the IAHA Independent Hotel of the Year. The award honors the hotel for setting a high standard of excellence in quality, service and guest satisfaction, according to AAHOA. It is awarded to a specific hotel for excellence rather than an independent hotelier in general.

Hotel Bella, located in the Northwest Willowbrook area, Houston’s downtown business district, opened in Summer 2016. It was designed by the owner, Jayson Patel, a hospitality interior designer, and reflects his modern take on architecture with 43 studios and suites, spa-inspired bathrooms and luxury

Other honorees included the following: