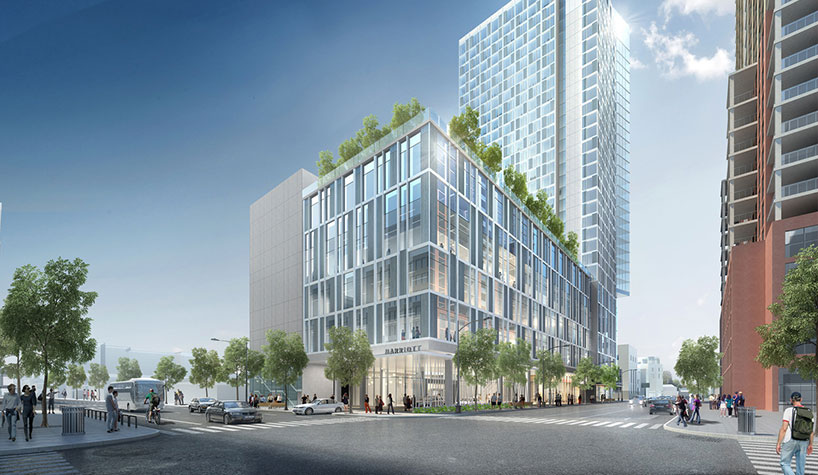 Rendering of the Austin Marriott Downtown

NATIONAL REPORT—Shovels are in the ground as new-build projects are underway across the U.S. Here’s a look at three of them:

An official groundbreaking of the 613-room Austin Marriott Downtown took place with White Lodging executives and city leaders. The hotel, located adjacent to the Austin Convention Center, is scheduled to open in the summer of 2020.

The full-service, 31-story Marriott is at the corner of Cesar Chavez and San Jacinto, and will offer views of the University of Texas campus, the State Capitol and downtown Austin’s skyline.

“This project will complement the existing JW Marriott Austin,” said Deno Yiankes, president and CEO of investments and development at White Lodging, referencing the White Lodging-developed property, which opened in 2015. “Together, these properties will provide a game-changing opportunity for the city, elevating its attractiveness for large meetings and conventions, which otherwise might not consider Austin.”

Together, the two properties have more than 1,600 rooms and nearly 180,000 sq. ft. of meeting space, which will be within two blocks of the convention center.

The Austin Marriott Downtown will have 64,000 sq. ft. of meeting, exhibit and entertainment space, three bars and a street-level full-service restaurant. It will also feature an exhibit hall with floor-to-ceiling windows along a 170-ft. glass wall.

The Thompson San Antonio and The Arts Residences celebrated its groundbreaking at the project site, 123 Lexington Ave., San Antonio.

The project is a mixed-use development, featuring a high-rise tower and hotel with 162 guestrooms and 58 residences. Slated to launch in 2019, Thompson San Antonio is being led by DC Partners, a Houston-based developer, and San Antonio-based Universal Service Group.

Powers Brown Architecture and Amass & G (whose project work includes Thompson Hotels’ The Cape in Cabo San Lucas) were hand-selected to design the property in collaboration with Two Roads Hospitality.

The property will include oversized guestrooms and suites, a full-service spa and fitness center, an outdoor pool overlooking the River Walk, and a 3,600-sq.-ft. ballroom for meetings and events. In addition, there will be dynamic F&B offerings, including a rooftop bar and a street-level signature restaurant from a celebrated chef. The hotel will also house 58 luxury residential condominium units.

Construction has commenced on My Place Hotels of America’s fourth Iowa property at 4653 Progress Dr.

The four-story, 63-room hotel is the third of 40 My Place Hotels planned by owner Matt Eller and partners, who opened their first two My Place Hotels in the Des Moines metro area during Q4 of 2017. This property is slated to open in Q2.

Each extended-stay guestroom will have a My Kitchen, complete with a two-burner cooktop, a microwave and a full refrigerator. The property is pet-friendly and will also include on-site laundry facilities, complimentary high-speed internet service and a 24-hour My Store, located in the hotel lobby.