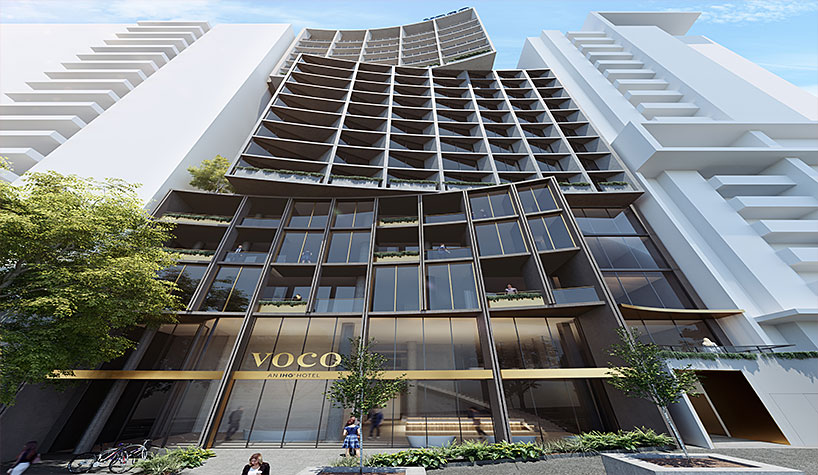 A rendering of Voco South Melbourne

INTERNATIONAL REPORT—A number of brands have added to their portfolios abroad with hotels that are expected to open next year and beyond. Here are some of them:

IHG Adds a Trio of Hotels
InterContinental Hotels Group (IHG) recently signed franchise agreements for an InterContinental in Rome and a rebranded Crown Plaza in Saipan in the Northern Mariana Islands in the South Pacific. The company has also added Voco South Melbourne in Australia, the brand’s seventh hotel in Australasia.

The Rome property, which is set to open in 2022, will be a restoration of a palazzo building designed in the early 20th century. The existing property includes 160 rooms and suites, a restaurant, bar, spa and public areas.

“The signing of an InterContinental in Rome represents an important moment in the growth of our luxury portfolio and brand presence across Europe,” said Willemijn Geels, VP of development, Europe, IHG. “In these challenging and unprecedented times, this signing shows the continued trust of our owners and partners’ place in IHG and our brands.”

In Saipan, IHG will rebrand the Fiesta Resort Saipan into the Crowne Plaza Resort Saipan in 2022, which marks the company’s further expansion in Micronesia. The long-term agreement was signed with Asia Pacific Hotels Inc.

The 416-room hotel will become the Crowne Plaza following a refurbishment, before adding a 116-room extension by 2025. Fiesta Resort Saipan features six dining outlets and a club lounge, and also offers four meeting rooms, a 300-person ballroom, a gym and multiple swimming pools.

Meanwhile, the new-build Voco South Melbourne is scheduled to open in early 2023 in partnership with Melbourne-based developers BEKL. Plus Architecture will design the 171 rooms.

Room Mate Signs Second Hotel in Portugal
Room Mate Hotels has signed a hotel in Porto, its second property in Portugal, acquired by an international fund managed by Caler Advisory. This follows the signing of the first hotel in the European country, which will open in Lisbon at the end of next year.

Located on Rua Cedofeita, one of the main shopping streets in Porto, the hotel will have 78 rooms, a garden with an outdoor swimming pool, a terrace, a banquet room, a gym and a spa. Interior designer and antiquary Lorenzo Castillo will be in charge of designing the rooms and common areas for the property, which will open at the end of 2022.

Langham to Manage Hotel on Australia’s Gold Coast Opening in 2021
Langham Hospitality Group will manage its third luxury hotel in Australia. Opening at the end of 2021, The Langham, Gold Coast will have 169 rooms and suites; the group will also manage the Jewel Residences by The Langham which consists of 170 serviced apartments.

Developed by AW Holding Group, the appointed architects for The Langham, Gold Coast and the Jewel are DBI Design and U.S.-based Oppenheim Architecture + Design, respectively. The interior design firm for the hotel is Sydney-based Studio Aria.

The property will have F&B options, a spa, fitness center and indoor and outdoor swimming pools. Additionally, the hotel will have a 7,500-sq.-ft. ballroom; an additional four meeting rooms with a total of 4,800 sq. ft.; and a multifunction room at 5,300 sq. ft.

CitizenM Expands to Italy
CtizenM and Antirion have partnered to establish citizenM Italian Properties, an alternative investment fund to invest in sites and existing assets to be converted into CitizenM hotels located in Rome and Milan.

The first acquisition of the fund is a property located in the historic center of Rome. It was designed and built in the late 1950s by architect Eugenio Montuori, and has an overall area of
approximately 75,000 sq. ft., with six floors above ground and one below ground. The asset will be refurbished and converted into a 160-room hotel, marking the first Italian opening for CitizenM, soon to be followed by more locations in Rome and Milan.

“Italy is a natural fit for the next phase of our global expansion,” said Klaas van Lookeren Campagne, CtizenM’s CEO. “We are very excited to launch this joint venture with Antirion. It gives us immediate access into the competitive market with the power to source and develop several high-quality properties in Italy, together with Antirion’s experienced and like-minded team.”

IHG, Radisson Expand Footprints Abroad INTERNATIONAL REPORT—IHG and Radisson Hotel Group have added properties abroad in Poland, Hungary, the U.K. and…
Brands Continue to Grow International Footprints INTERNATIONAL REPORT—A number of brands have added to their portfolios around the globe, including  Hotel Indigo…
Radisson, IHG Brands Make Their Debuts Abroad INTERNATIONAL REPORT—Radisson Hotel Group and IHG have opened hotels in new locations abroad. They are: Radisson…
Hotels in the works abroad for W, Regent and Six Senses brands Hotels in development abroad include a W hotel in a new entertainment development in Macau, a…