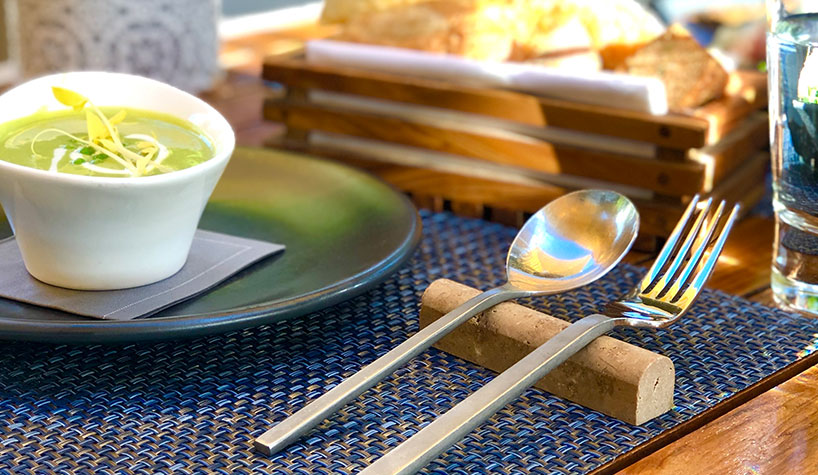 NATIONAL REPORT—Dining Elevated Founder Rebekah Green believes that when you add this one novel item to a table setting, it can completely transform the guest’s dining experience.

The idea for her flatware rests was sparked at a dinner party with friends.

“A person at the party said, ‘Don’t you hate it when you see utensils on the table?’ I’m not a germaphobe but the more we talked about it, it struck me that it didn’t make sense for diners to put utensils on the surfaces when they don’t know how clean they are,” said Green.

Restaurants serve more than 70 billion meals in the U.S. each year, according to research titled “Study to Assess the Prevention of Microbial Cross-Contamination From Tables to Utensils Using Flatware Rests” by the University of Arkansas’ Division of Agriculture.

Annually, approximately 48 million foodborne illnesses occur in the U.S., yet only roughly 800 foodborne disease outbreaks get reported, the study found. From 1998–2013, 56% of the 17,445 outbreaks reported were associated with restaurants. While scientifically validated cleaning and sanitation strategies are available, microbial cross-contamination from environmental surfaces remains an issue, according to the study.

An entrepreneur with a focus on sustainability, health and wellness, Green started her career building state-of-the-art green homes. It was her affinity for form and function, paired with a passion for health and good food that served as the catalyst for the launch of Dining Elevated’s flatware rests, which elegantly save forks, knives and spoons from ever touching a tabletop.

“Study after study proved to me there was a sense of discomfort among guests who see these ratty white rags restaurants use to wipe things down. They’re haphazardly wiped and not sterilized properly,” she said. “Tabletops are the most touched in dining spaces and most likely to become contaminated. Putting a utensil on that tabletop makes no sense.”

She canvassed additional family and friends and then started to search for a solution.

“I had something on hand and I’d put my utensils on it when I sat at a table. Eventually, it would become branded as Uplift. It is meant to uplift spiritually and functionally,” she said. “We were off and running. I wanted to create a collection that was wide ranging, fits in any aesthetic and offers some lightweight versions.”

For Green, raising awareness has been a challenge. “It resonates on the individual level, but it’s harder to see the bigger picture for some hotel brands. There’s a big gaping hole in diner psychology,” she said.

However, Green remains determined and has been pounding the pavement to get her product into the hands of restaurant and hotel operators. Her first sale of Dining Elevated’s Uplift flatware rests with Estuary, a farm-to-table restaurant at the Conrad Washington DC. Green also secured a product appearance on the culinary competition TV show Top Chef. Fine-dining venue Cherry, housed inside the W Hotel DC, also features flatware rests from Dining Elevated.

With recent success, Green is energized and eager to keep growing the business. “My aim is to take on the world and make these flatware rests available to every diner,” she concluded.

Hotels Elevate F&B Experiences INTERNATIONAL REPORT—Hotels here and abroad are enhancing their F&B outlets. New restaurant openings and upgrades, plus…
Cage-Free Egg Policies Make Headway in Asia INTERNATIONAL REPORT—Guests today are increasingly aware of what they put in their bodies and their impact…
Six Senses guests can travel light with Luggage Free platform Now Six Senses guests can enjoy the freedom of traveling light and sending their bags ahead…
WTTC: 72-Hour Quarantine-Free Trips Could Revive Int’l Business Travel LONDON—International business travel could restart if agreement is secured to safeguard journeys of up to 72-hours…